I was born and raised in Cusco, child number six out of seven from a farmer’s family. Over the year’s my father studied at an art school so at the young age of nine I started selling my father’s paintings on the streets of Cusco to the tourists which was hard and long days. The tourists would ask me how to get a to an archeological site so I told them how to get there but they would ask me if I could please take them there. So I decided to take them, they would give me a good tip so it was then that I realized that I could make more money by taking people to the different sites.  This is where I found my desire to lead people. I decided to study tourism which is a career in Peru. Then I studied wilderness first responder at the Puget Sound University in Washington state. I must have done more than 400 tours on the famous Inca trail to Machu Picchu. And still working until now, I have the love of traveling to many countries. I have visited  China, Macao, Japan, Holland, Switzerland, Italy, the  USA Mexico, Panama, Chile, Argentina, Bolivia & Ecuador. I still want to visit many other countries. For me traveling is the best thing that a human being can do, not only for experience but also because that way we can really see how important and similar are the people that spend their time traveling to Peru and their time exploring with us. I’m  fluent in English, Spanish, and Quechua, my expertise and rich knowledge of history, archaeology, geography, flora, and fauna inspire me to create interesting, varied tours around Peru. I work with a team of local porters and cooks from the Cusco area, and together they will ensure your safety and comfort for your entire excursion. , you won’t just have a guide, but a good friend as well. I am confident that you will be glad you chose to travel with Amazing Andean Adventures!

Born in 1983 in the city of Cusco: from a family of artists. Art that still persists in my daily life. I did my first studies at the I.S.C. where I learned the technical career of systems, later Graduated in 2011 as an Official Guide of Tourism. Knowledge in Plastic Arts (Oil, drawing and Painting) I created an art gallery for my family called arteaguirre.com
Studies carried on, at Viceregal Art in Peruvian Painting of the 16th, 17th and 17th centuries. During the years 2006 and 2009 I worked and studied at the CTR- Religious Tourist Circuit. Having access to documents and museums such as Archbishop Museum, San Blas Temple, Cusco Cathedral.
For the year 2010 I made a Monograph about the Temple of the Society of Jesus and the stay of the Jesuits in Cusco. with Supervision and advice from Jesuit Fathers like Alejandro Beneito.
Official Authorization for the Inca Trail Network from 2012-2022
Studies conducted in Machu Picchu Pueblo (2015-2016) Topic: The Historic Sanctuary of Machu Picchu. I have a passion for guiding and teaching my city to visitors from all over the world in both Spanish and English. 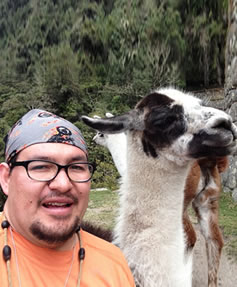 Was born in the village of Calca at the state of Cusco – Peru, right in the center of the so called sacred valley of the incas in the year of 1980. he began hiking the inca trail and exploring the vilcabamba region when he was just seven years old. living along whit his mother anthropology and professor from the university of cusco while she was working for a ngo and teaching history and traveled extensively through the mountains and villages of the cloud forest area of cusco. in the year of 1987 his entire family was forced to move to the city of cusco due to the hard time that peru was going throughout however his mother remains in the area of the cloud forest teaching in vilcabamba near macchu pichu. that is the way he developed his love and passion for the andean civilization. At age of 13th he began to work as an assistant guide, during his summer vacations for a senior guide who put him into the life of the tourism, which is the way he began to be immersed in the native legend of the andes. helping to develop the passion for his culture that is so eloquently expressed in his guiding.

whit a degree in economy science from the university of san antonio abad del cusco and phd on public health care from the minnesota technical school of the u.s.a.( 2011 ) , an official certification and licenses of the polytechnic guide´s school of the city of cusco, a certification of volunteering in the rain forest ( manu national park ) supported by a foundation call tres mundos ( by the danisnh – norigian foundation for a better life in the andes ), for six months as an interpreter and tour leader in the year of 2000 and after almost 13 year leading groups in the south part of peru and occasionally to the amazon.

harry had been working as tour licensed guide since may 2001 and currently training volunteers since 2009 for the ngo “for a better life in the andes – tres mundos” he had been working.

traveling to holland ,denmark and norway the last past summers ( 2008, 2009 and 2010 ), and the winter of 2010 to the usa working for the same ngo in order to be teach for the next project that works whit indigenous poor andean families doing social projects in order to improve their way of living building properly toilet and kitchens.

next year 2011 he was part of “the mayan change” as leader volunteer name of the project at guatemala where he spent the whole month, supported by the same organization he had been working and volunteering for a while every summer.

as a matter of fact those countries are where he has renewed his first wilderness aid international certification.

This is the great opportunity which gave him the experience to work on a public health care development project in the native communities of Guatemala , Belize and Honduras where he was able to look for similarities whit his native culture and the great Mayan society He might literally leave to the E.E. U.U. this year around August to the state of Minnesota for training in a wilderness program at the Minnesota University. 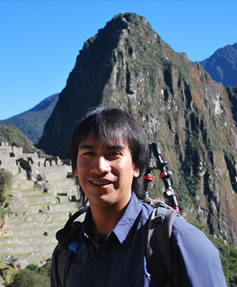 Having worked as a freelance tour guide and tour leader for over 10 years I have great experience, enthusiasm and confidence in leading sightseeing and outdoor hikes throughout Peru.

I have achieved success in my career as a tour guide and have received many positive testimonials. I am an honest and straightforward person who has excellent verbal communication skills.

I am interested in my heritage and culture especially, the Andean religion. This influences the way I work and live my life. I like being able to introduce my tourists to the Andean ideology and Pachamama and the cultures of the Andean people.

Testimonials from our Passengers